The strongest kids in the world are both strong girls and boys that can do some incredible things you cannot imagine, that even adults cannot do. From a kid that can pull a van to a kid that does 6000 push-ups uninterrupted and more.

These wonderful kids turn out to be among the top 13 world’s strongest kids 2022, their names are,

Check them out and learn more fascinating facts about these kids. Keep reading!

Richard Sandrak was born in Ukraine and when he was two years old, he and his parent moved to the United State. At a very young age, Richard Sandrak’s father trained him with body-building. His father also taught him martial art. At the age of eight, he became the world’s strongest kid.

He is also referred to as Little Hercules because of his body’s muscular structure. Daily he would do 600 push-up and 300 squats. He has been featured in many TV shows and magazines. Now, the little Hercules is a Hollywood star.

Kyle Kane was only twelve years old while he was lifting weight equal to double his weight. He was lifting colossal 308 pounds (22 stone or 140kg) at this age, making him be the world’s strongest kid.

He has nicked named, Little Arnie after the famous bodybuilding circuit, Arnold Schwarzenegger because of his physique.  He is 5 feet 7 inches weighing 10.5 stones (147 pounds or 67kg).

Maryana Naumova is considered as “Master of Sport of Russia, International Class.” This beautiful strong girl was born and lives in Russia. when she reached the age of 15, she bench-pressed 331 pounds (150 kg) in a tournament  “Arnold Classic”. She has won over 15 world records. 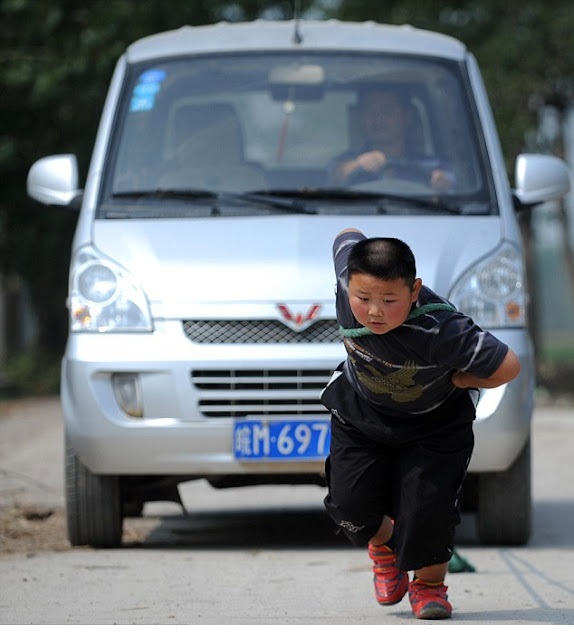 Yung Jinlong is from Anhui province, china. By the age of nine-month, he was capable of lifting an oil drum weighing 11 pounds (5 kg). Yung Jinlong was only seven years old when he was seen by his community to pull a vehicle weighing 1.85 tons (3,700 pounds or 1,678 kg).

He was born in 2005 and adopted by Neil and Dana Hoekstra. When Liam Hoekstra was 5 months old, he began to walk as a toddler, he did iron crossing. At 6 months, he could climb and descend the staircase on his own without assistance. Soon his adoptive parents send him to join Gymnastic.

At one year, he began to do a chin-up. When others are still struggling, he is already hoisting his torso above the chin-up bar and stayed in position for minutes.

At the age of 18 months, he began moving furniture around his home. At 3 years old his body muscle is 40%, with this, he is able to lift heavy weight with ease.

Liam Hoekstra can lift heavy dumbells without it accelerating his breath. He has a genetic condition that was two cases including his own was documented in the world.

That is Muscle hypertrophy, whereby the body’s fat is inhibited, the body’s muscle builds up rapidly, and the skeletal structure. He is also known as is the mini hulk.

CJ Senter is an unusual kid that loves being fit. Unlike other kids involved in lift weights, he is different. He knew lift weight is dangerous for growing kids, so he looks for other ways to exercise and become strong.

He is also known as a workout kid on account of his activities on YouTube and his DVD. Which was named as workout showing his activities about his exercise that can be entertaining to kids.

For hand-walking strength and push-up, the two brothers Giuliano and Claudiu Stroe hold the Guinness world record. They started weight lifting at the age of two.

The younger name Giuliano Stroe is even stronger who was born on June 14, 2004. In a competition where kids hand-walk with a weighted ball between their legs for ten meters, Giuliano was the fastest.

He was the first person to do many 90-degree push-ups. Giuliano Stroe has broken so many world records like 20 push-ups on 4 glass bottles,  40 handstand push-ups, an iron cross for more than 40 seconds, a Human flag for 1 minute 32 seconds, and more as one of the strongest kids in the world.

Julia Vins, the Muscle Barbie hails and lives in Saratov, Russia. She was only 15 when she started going to the gym on her own. When she was 12, her parents divorced.

To cope with the effects, she decided to involve in gymnastics. She started power-lifting, though she has the goal of going to law school. But she decided to focus on powerlifting.

Despite people’s negative comments about her physique, she was not discouraged to pursue her goal. At World Powerlifting Congress and competition, she broke records such as 275 kg (606 pounds) squat, 175 kg (385 pounds) bench press, and 205 kg (452 pounds) deadlift.

Naomi Kutin from Fairlawn, New Jersey broke the world record as one of the world’s strongest kids. She lifted a weight twice her body size, she lifted 215 pounds in the raw squat. This supersedes that of 44-year-old Ana Geitner which is can only lift 209 pounds in raw squat.

Jake can deadlift 350 pounds (159 kg) with this she broke five world records in powerlifting. He is working hard to achieve his goal of deadlift four times his weight.

C.J Cummings is a wonderful, humble kid that weighs 152 pounds (69 kg). In Dallas, C.J Cummings was able to jerk 386 pounds (175 kg) during the Weightlifting National Championships. He was just 15 years; no other kid in America was able to do this. 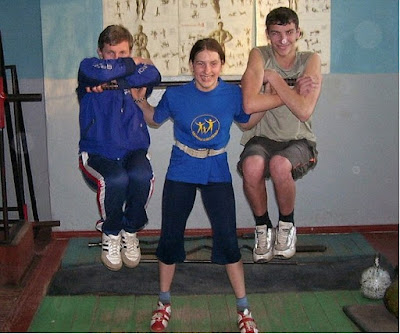 Varya Akulova’s parents are professional weightlifters. What do we expect from their kid? At 4 days old her parents began to train her. Her father said his goal was to raise her as the strongest girl in the world. As little as the Varya is, a heavy bot was tied to her legs and hands to develop muscle.

Andrey Kotash was born and lives in Ukraine. Since the age of 5, Andrey has been training in martial arts and gymnastics. From back-to-back push-up, he was able to do that 4000 times for almost two and a half hours. He even stated that his best was 6000 uninterrupted push-ups.

What is your view about the world’s strongest kids? We will like to hear from you in the comment section. Please share if you enjoy reading this article. Thanks